Singularity (Sisi) is a public test server for EVE Online that is used by both CCP developers and EVE players to test changes and new features before they are released to the Tranquility server. Test servers have a very strict set of rules.

Its primary function is to provide a test environment as close as possible to the live environment of Tranquility. For this purpose, the Tranquility database is "mirrored" (copied) over to the Singularity server once every few months (or more often, if needed by the CCP Quality Assurance department). For testing the performance of the server and client with many players at the same place (especially fleet-fights) there are periodical mass testing events.

Hint: Please keep in mind that most new features on the server are still in development and not set in stone. They will most likely be changed and tweaked further. If you find bugs please report them. If you have more feedback please post it in the Test Server Feedback Forum. 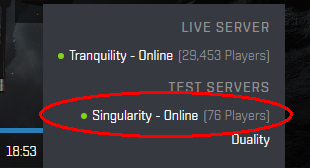 With the EVE launcher (for both Windows and Mac) it is very easy to connect to Singularity:

Just select "Singularity" in the server drop-down menu and then login with your account. Everything else (creating and patching of the client) is done by the launcher.

You can copy your client settings through "manage profiles" in the launcher, if you want to do so.

The petition system is not used on Singularity and Game Masters will not be able to address issues related to Singularity. If you need assistance, contact one of the CCP or ISD staff present on the server, or post in the Test Server Feedback Forum

Getting moved and other commands

If you want to be moved to M-OEE8 or some other destination, type /moveme into any chat channel. More details and several other commands can be found at Singularity player commands.

For several issues (like requests for account reactivation) it is also a good idea to check the Test Server Feedback Forum. There you can also discuss new changes on the test server or possible problems.

The Singularity server runs on a multi-node server cluster, similar to TQ, but with lower numbers. The number of nodes may vary, as the development team will add or remove hardware resources from the cluster depending on testing requirements.

The process of "mirroring" consists of taking an exact copy of the Tranquility database, including character and account data, like a snapshot. This copy is then processed by the CCP Deployment team and all starbases are removed, in order to prevent players from spying on their positions and then using this information on the live server. Basic moon minerals are available in all moons, to help testing and prevent moon scouting on the test server. All accounts are edited so they don't expire. Agent memory (both standing and loyalty points) are removed. S&I jobs are removed (because jobs in starbases would get stuck). All assets of structures is moved into asset safety. The market is seeded so that all market items cost 100 ISK and are in plentiful supply. At least one station per constellation is market seeded like this. In addition there are some other internal adjustments. This entire process can take up to 3 days, then the Singularity server is open for public.