The Scope's Galactic Hour with Ret Gloriaxx brings a roundup of news from around the cluster as claims of conspiracy and plots emerge amidst concerns of a looming Triglavian invasion.

Yulai, Genesis – The Pharos of Thera group, a splinter faction of the Sisters of EVE, has claimed that CONCORD is preparing extensive "safe zones" and even "planetary bunkers and other survival strongholds for the ruling elites of New Eden" in the event of a Triglavian invasion of New Eden. The allegations come at a time of rising fears that the inscrutable and mysterious Triglavian Collective is preparing to mount an assault on New Eden using "World Ark" super ships it is building in Abyssal Deadspace.

Pharos of Thera has often warned of covert activities carried out by CONCORD or the core empires, as with their YC120 claim that the DED's Special Affairs for Regulations & Order unit was engaged in bizarre experiments under cover of a timebase measurement project. CONCORD has declined to comment on "wild conspiracy theories" and will only "reiterate that our newly-formed AEGIS division continues to co-ordinate the ongoing response to emergent threats."

D85-VD, Syndicate – The Scope's Galactic Hour with Ret Gloriaxx has been passed imaging data that purports to show a meeting held earlier this week between a number of Amarr Empire-aligned capsuleers, an alleged Thukker renegade group and the notorious Khanid slaver Orlon Zashev. Apparently held on the Intaki Bank Vault station in the D85-VD system of Syndicate region, the meeting is alleged by the Galactic Hour's source to be evidence of "a criminal conspiracy by liberal capsuleers to overturn the order of Holy Amarr in conjunction with Thukker renegades and a wanted criminal." 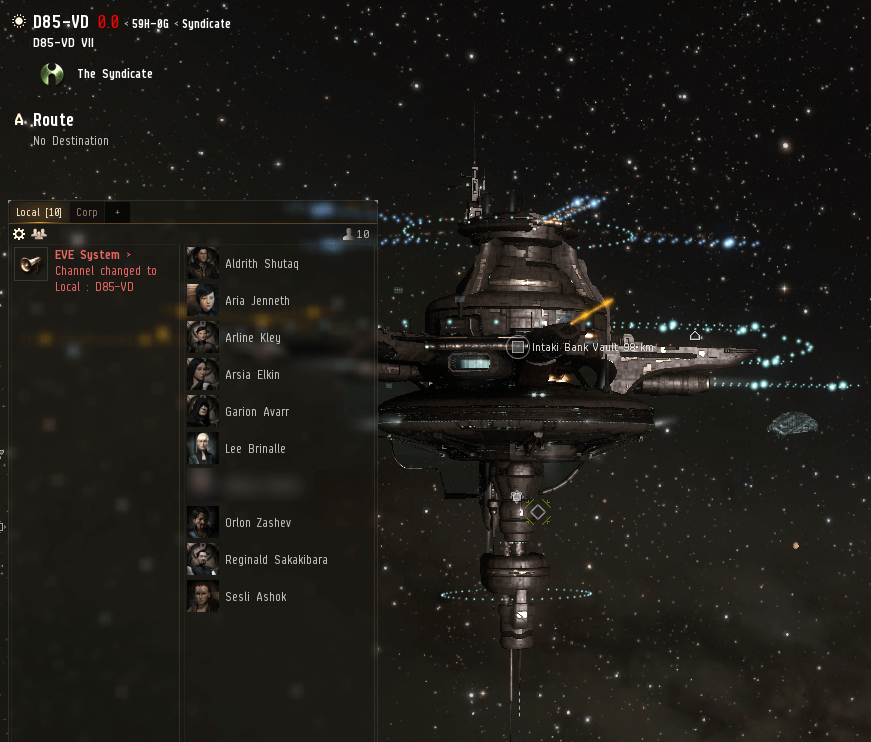 The Scope's Galactic Hour with Ret Gloriaxx has been able to authenticate the image despite some adjustments evidently intended to obscure the presence of one person in the system. Public routing data and locator agents on contract to the Galactic Hour's award-winning investigative team have confirmed that a number of the persons shown in the imaging data were present in the D85-VD system on or about YC121-05-14, the day it is claimed the meeting took place. The Scope's source has claimed that the parties present left separately despite this meeting potentially being related to a public auction of Orlon Zashev for bounty by the Seykal Expeditionary Group's Sesli Ashok.

Villore, Essence – A powerful network intrusion attack in Semiki was primarily aimed at penetrating a Federal Intelligence Office covert listening post operating out of the Aliastra Warehouse in the system, according to a whistleblower claiming knowledge of the Gallente Federation's investigation into the incident.

"The Caldari side's investigation has focused on the background and apparent motivations of the alleged perpetrator, Steine Vailakkel, and understandably so. But our side immediately focused on the FIO's covert post on the Aliastra station. The word from on high was that any sign of intrusion was to be reported straight up the line. When the investigation uncovered evidence of data-siphons running on the personal implants of FIO staff, all the hells broke loose. The hammer came down on the whole business and the Black Eagles got involved. Everyone on that post has disappeared into a black hole. If you ask me, Vailakkel was a catspaw for someone playing another game entirely."

The Galactic Hour's source has shared confidential data confirming their account via a secure and anonymous data drop. We would like to emphasize that not even Ret Gloriaxx of the Scope's Galactic Hour with Ret Gloriaxx is aware of the identity of this source.

New Caldari, The Forge – Bribery allegations have prompted fresh calls for the Caldari Business Tribunal to accelerate proceedings and fully empanel a corporate audit and adjudication board to deal with charges that Nugoeihuvi and CBD corporations engaged in smuggling during a CEP mandated Caldari-Gallente border closure. Media outlets controlled by the Ishukone, Hyasyoda and Quafe corporations have been airing claims that officials of the Caldari Business Tribunal have been bribed or approached with offers of bribes to deliver summary judgment to dismiss the charges under provisions of the Caldari corporate sovereignty laws.