Duality is a semi-public test server for EVE Online that is used by both CCP developers and EVE players to test changes and new features before they are released to the Tranquility server.

Duality differs from Singularity in that it is an event server, meaning that it is focused on organized events like mass tests and playtests coordinated by CCP. Only during these events is Duality available to players, the rest of the time it will be in VIP mode and only CCP developers and ISD BH volunteers will be able to access it. Otherwise Duality works very similarily to Singularity and the database is also mirrored from the Tranquility database (but less frequently).

Hint: Please keep in mind that most new features on the server are still in development and not set in stone. They will most likely be changed and tweaked further. If you find bugs please report them. If you have more feedback please post it in the Test Server Feedback Forum.

In order to access the Duality server you need to have an active account on Tranquility. The account needs to have been active at the time when the current mirror was taken, this date is usually mentioned in the Test Server Feedback forum. 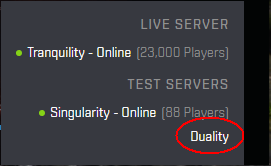 With the EVE launcher (for both Windows and Mac) it is very easy to connect to Duality. Just select "Duality" in the server drop-down menu in the bottom-right corner and then login with your account. Everything else (creating and patching of the client) is done by the launcher.

There is an ingame channel named Duality where players on the event test server exchange information. You may also find volunteers and developers there.

For several issues it is also a good idea to check the Test Server Feedback Forum. There you can also discuss new changes on the test server or possible problems.

The setup of Duality is similar to Tranquility or Singularity, but with lower numbers and with most machines being virtualized.

The Duality server is an event server, which means that it will be open to players only during the course of events organized by CCP. The rest of the time it will be in VIP mode and only accessible by CCP developers and ISD BH volunteers.

The process of "mirroring" consists of taking an exact copy of the Tranquility database, including character and account data, like a snapshot. This copy is then processed by the CCP Deployment team and all starbases are removed, in order to prevent players from spying on their positions and then using this information on the live server. All moon minerals are available in all moons, to help testing and prevent moon scouting on the test server. All accounts are edited so they don't expire. Agent memory (both standing and loyalty points) are removed. S&I jobs are removed (because jobs in starbases would get stuck). All fitting of structures like Citadels is deleted and the assets of structures in W-space is moved to 6-CZ49 into asset safety. The market is seeded so that all market items cost 100 ISK and are in plentiful supply. At least one station per constellation is market seeded like this. In addition there are some other internal adjustments. This entire process can take several days.

After a mirroring process, the Tranquility and Duality databases are separate and distinct and no synchronization between them will occur until the next mirror is taken from Tranquility and deployed on Duality. Character progression on Duality will be independent of Tranquility - players can effectively train two different sets of skills on the same character, if they so wish. Actions taken on the Duality server will not affect your account or character on the Tranquility server.