The Scope's Galactic Hour with Ret Gloriaxx brings your roundup of the latest news from around the cluster, as the Triglavian Collective invades the vital Niarja system, the key link between the Amarr Empire and the Caldari State.

Niarja, Domain – Triglavian Collective forces have mounted an invasion of the Niarja system in the next step of their renewed offensive to conquer New Eden systems across the cluster. EDENCOM's Provost Marshal Kasiha Valkanir has designated the defense of Niarja "the top priority of EDENCOM forces" and CONCORD's Inner Circle has declared it vital to the interests of "New Eden Civilization" that the key trade link between the Amarr Empire and Caldari State be maintained.

Triglavian forces began the invasion of Niarja in the early hours of YC122.08.17, with this strike at the sole Amarr Empire system bordering the Caldari State a clear threat to the two allied powers. Caldari State forces are current embroiled in a struggle to turn back Triglavian invaders in the Tunudan system but response forces are being redeployed to the Kaaputenen system bordering Niarja.

On the primary trade route between the Amarr and Jita systems, Niarja's importance as the single Amarr system directly connected to the Caldari State across the primary stargate network cannot be overstated. Disruption of this vital link between the two traditional allies would have severe repercussions for the economic health of both the Amarr Empire and the Caldari State. In the context of the war with the Triglavian invaders and the EDENCOM alliance, even the Gallente Federation and Minmatar Republic view the defense of Niarja as a strategic priority.

In terms of Amarr internal politics, the loss of Niarja would be yet another blow for House Sarum, following the loss of Raravoss and Harva, not to mention its withdrawal from planetary operations on Floseswin IV. House Sarum forces have been particularly taxed by the need to defend the vast territories of Upper Domain, Devoid and the Bleak Lands, together with its ongoing operations in the Amarr-Minmatar militia warzone. Sarum forces have not been without victories and the fresh defense and fortification of Khopa system, together with other successes, has served to reinforce the traditionally militant House's standing.

For their part, EDENCOM and CONCORD remain firm that all New Eden systems must be defended for the sake of "human civilization as a whole", even in the face of an evidently renewed and substantially enhanced offensive by the Triglavian Collective. Despite this public face, sources within the DED and EDENCOM's ranks have privately expressed disquiet at the scale of the new Triglavian offensive. Some sources have even questioned the almost universal adoption of "fleet in being" strategic doctrines to defend the core worlds of the "Big Four" empires. 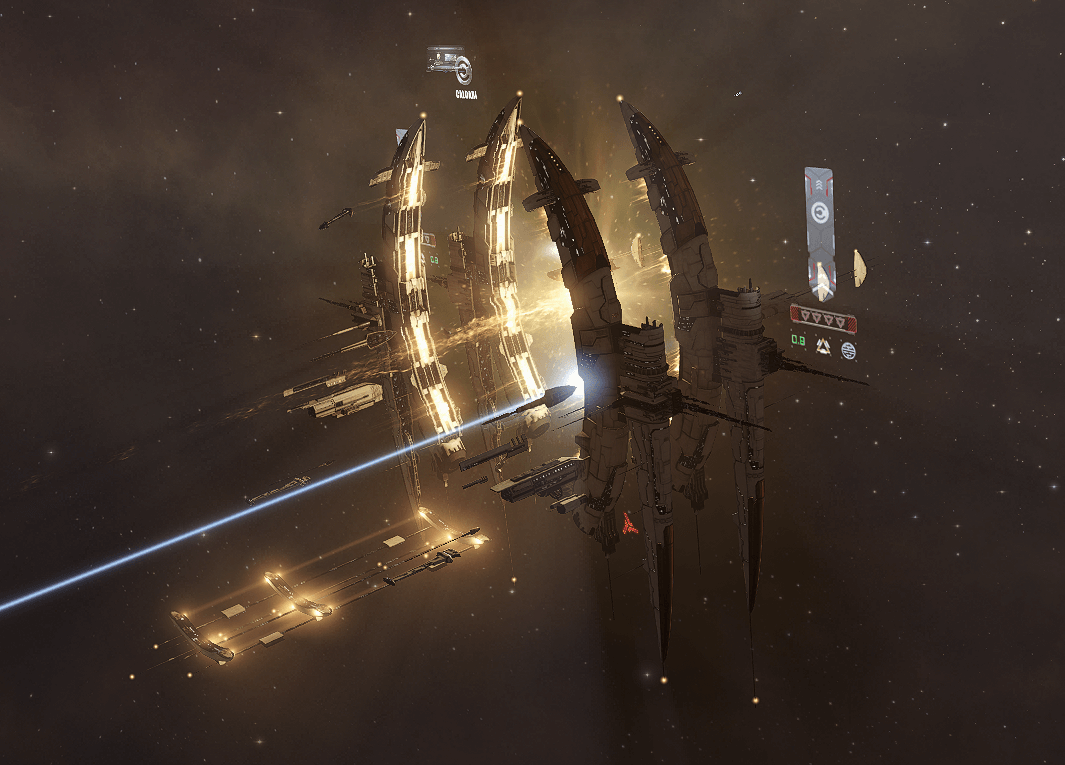 Above: Heavy traffic through the vital Niarja-Kaaputenen stargate as fighting continues during Triglavian invasion of Niarja

Arshat, Domain – EDENCOM forces bolstered by an interstellar coalition of capsuleers "loyal to civilization" have successfully aided the Amarr Empire's defense of the Arshat system in the Nashar constellation of Domain. Provost Marshal Kasiha Valkanir has hailed the effort in particular for its "heroic and monumental achievement in pushing Triglavian forces back from their so-called 'First Liminality' and ultimately out of the system."

The Arshat campaign represents the first occasion on which an established Triglavian invasion force has lost its 'liminality' hold on a system. EDENCOM forces were able to press this advantage and successively secure and fortify the system as an EDENCOM Fortress. Royal Heir Arim Ardishapur also praised the efforts of "those capsuleers loyal to civilization who have been able to set aside petty differences of ideology in order to defend against the inhuman threat of the Triglavian monsters."

As a holding within the "Lower Domain" subregion, Arshat comes under the authority of the Ardishapur Military Circuit, with this successful defense sure to enhance the military prestige of House Ardishapur even further. The robust defense of Derelik region from repeated assault by Triglavian invaders over the last year had already alerted many observers of Imperial politics to the increased military power of a House that appears for many Amarr a beacon of faith, order and stability within the Empire.

Anbald, Metropolis – The successful defense of the Anbald system by Minmatar, EDENCOM and allied capsuleer forces has been followed by its establishment as an EDENCOM Fortress system. This is the fourth Minmatar system to be fortified to the fullest extent by EDENCOM, together with three other systems designated as EDENCOM victories and several others where Triglavian invasions have been stopped.

So far, the Triglavian invaders have only succeeded in establishing space control presence in three "minor victory" systems in Minmatar Republic space. The overall impact of the invasion on the Minmatar Republic has been relatively low with this appearing to be a function of the much smaller size of Minmatar territory relative to the Amarr Empire and Gallente Federation.

Minmatar Republic forces have also pursued an effective doctrine of rapid response to Triglavian invasions. Military experts have noted that strategies and deployments prepared in anticipation of invasion appear to be "very well rehearsed relative to other interstellar powers and particularly suited to repelling a force reliant on directed energy weapons and heavy armor".

Despite the continuing good fortune and above average performance of the Republic in the face of the invasion, there has been much discussion of the role of EDENCOM and its administration of the "Fortress Systems" established under its mandate. The mutual defense pact upon which the New Eden Common Defense Initiative is based allows for and indeed promotes the fortificiation of systems by EDENCOM. However, the prominent role of a number of Amarr and Caldari military and intelligence figures in EDENCOM has caused much concern.

Claims that Fortress systems are "invasion by other means by the Amarr and their Caldari allies", as the Karhak Circle of Tribal Defense put it in a recent bulletin, are increasingly common currency in Minmatar political discourse. The Tribal Council of Chiefs and Sanmatar Maleatu Shakor have not commented on these allegations directly but continue collectively to support and promote co-operation with EDENCOM. However, the Republic Justice Department in particular is known to harbor deep reservations about EDENCOM and its increasing presence across the Minmatar Republic. This view is more clearly on display through politically allied entities such as the Karhak Circle and a number of anti-slavery and liberation networks.

New Caldari Prime – Caldari State markets continue to tumble following a series of disastrous losses to the Triglavian Collective, with the invasion of Niarja halting and reversing a rally led by stocks in the Caldari military-industrial sector. Executive classes in most megacorporations are now openly criticizing Caldari Navy leadership and urging the Chief Executive Panel to take further action to reform the Navy, or even place it completely under control of officers drawn from corporate security forces.

Citizens and workers in general are also continuing to agitate and protest on message channels, holonet rooms, and increasingly in workplaces and on the streets. While the most recently lost systems of Kino, Otela, Otanuomi and now Konola are primarily mining and industrial systems, lacking the huge populations of core corporate worlds, the economic and political impacts have been huge. While some systems have seen major efforts to evacuate non-combatants, particularly during windows provided by the repulsion by capsuleers of a Triglavian World Arks, the losses of resources and valuable colonial holdings are immense blows.

Even with limited populations and successful evacuations, billions have been severely affected and the psychological impact on the Caldari population at large has been enormous. The mood against the Triglavian threat remains one of resolute defiance overall but an undertone of questioning, centering particularly on the mistakes of upper executive classes has begun to dominate. Open talk of executive corruption, including protests against it, has increased. Corporate security forces are stretched thin due to the war and appear to be almost universally under orders to show restraint, emboldening the mood of open dissent among Caldari citizens.

Caldari State efforts are currently focused on defending Ahtila system and trying to prevent the fall of Tunudan in an atmosphere where yet another loss could lead to serious unrest within the State.