The Speakers of Truth 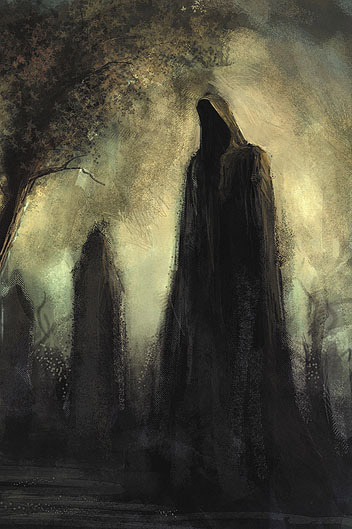 The Amarrian order that calls itself the Speakers of Truth harks back to the Time of Contemplation.

It was a quiet period in Amarrian history. The Holders had gained power but had yet to start their expansionist Reclaiming in earnest; instead, they were focused on solidifying their powerbase. The appearance of the first Emperors was a big help in that respect, since it gave the Holders the opportunity to rule the masses by proxy and not have to risk their own necks in the process.

However, the Holders decided that a trap door was needed, an emergency option for them to wield executive power should the Emperor grow too powerful too quickly. To maintain the appearance of neutrality, they set up this power through a separate institution known as the Speakers of Truth. This institution was a religious order staffed with hand-picked theologians that were known not only to be favourable to the people's cause rather than to the Emperor and the royal family, but also to be thoughtful, kind, intelligent individuals who had more interest in improving the lives of their fellow men rather than engage in the dirty games of politics. In short, the kind of people who wouldn't be any trouble.

The order wasn't publicized in any manner, and was buried beneath rules, regulations and religious red tape so as to hide its true nature from the Emperor and his cohorts. Its only distinguishable purpose was to act as intermediaries in religious disputes should the need arise - in which capacity their word would be equal to that of even the Emperor himself - and to recoup its operational costs by operating as an educational establishment for selected Holder students. The latter aspect was intended so that the Speakers of Truth would not appear to be overtly political, and thus would not attract undue attention. The Holders then intended for the Speakers of Truth to be brought out in circumstances where they needed to counteract or even veto a decision made by the ruling Emperor. As it turns out, these circumstances never arose, and the order was eventually forgotten by most of the ruling body.

The order took on its own quiet life, and ticked along in peace. They were situated in a remote location, the better to avoid getting involved in politics, and for the most part could operate without interference. Aside from their hidden purpose of judgment, the Speakers of Truth offered the usual aspects of religious life: They studied natural science, led a self-sustaining life, and even offered temporary sanctuary to refugees and those in need.

In fact, the order's controlling body quickly realized that the best way to ensure the order's survival would not be to try and eliminate the political trap doors the Holders had built for it - the moment they'd start making waves, the order would immediately be dissolved - but to use their talents to insert itself in Holder society, digging in to such an extent that it would be unthinkable to remove them. Therefore, the Speakers of Truth concentrated on building a reputation as an outstanding educational establishment, offering both a private curriculum for select children of Holders and a free education program for those children of Commoners who showed promise. The Holder program gained them obvious popularity with the ruling classes, and eventually led to strong backing by those who had graduated from the Speakers' schools and risen to high public office. The Commoner program, meanwhile, had a strong focus on religious studies, making it all the more popular among the lower orders within the Holders, who embraced any societal function that served to keep the Commoners obeyant and faithful.

The tactic worked. By the time of the Moral Reform, the order was regarded as a minor building block in Amarrian high society: a respected and respectable institution that exuded a mix of piety and academia. In addition, they were seen as strictly apolitical, to the point where they were sometimes even asked to perform their original arbitrative duty, albeit in a far lesser capacity than intended. Ordained members of the Speakers of Truth have divine permission to act as arbitrators in disputes both religious and secular. While they have free rein to dispense whatever judgment they see fit, the bulk of laws which surround their order sometimes makes this a little difficult. As a result, their authority tends to be accepted by the involved parties as an item of faith rather than on a strictly legal basis. The order was subsumed into the Theology Council during the latter's rise to position as main authority on religious trials and punishment, but due to the Speakers' educational focus, they've managed to continue operating as a separate unit, and the Theology Council rarely calls upon them to perform duties of the court.

Of course, given that the Speakers of Truth are sometimes asked to rule in matters involving high-ranking Holders, their power does rankle some of the Amarr elite. The Privy council, composed of the five royal Heirs, has always treated the Speakers of Truth as a minor thorn in both their sides, but have never found enough reason to act against the order. There exists a sort of unspoken agreement where the Speakers don't interfere with matters that might have a political bent, and in turn are allowed to keep their arbitrator powers unchallenged. Of course, there may crop up exceptional cases in which the Theology and Privy councils will actually endorse the Speakers' involvement in a political matter. One suspects that those cases will not bode well for the defendant. Not well at all.