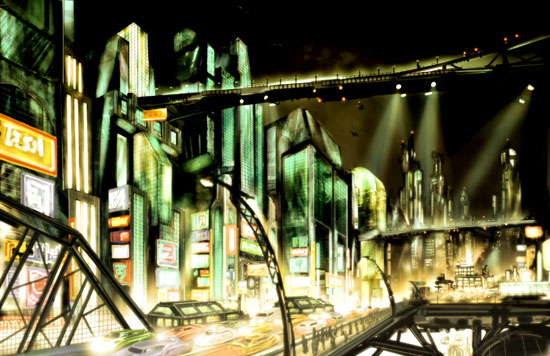 Mon Dieu, man, pick your jaw up off of the floor, at least. Drool is hard to get off of a carpet.

Heh heh. Yes, the Crystal Boulevard is indeed impressive. You really haven't seen wonder until you've seen an entire street - buildings, roads, lamps and all - made out of clear crystal. This is a view I have trouble getting tired of.

Not all of it's the same, you realize, of course. The buildings and lots change hands constantly, so they have to be made of something fairly cheap that still sparkles in the sun. Usually glass, and some of the cheaper places have actually started using clear polymers in buildings. Completely ruins the ambiance, as far as I'm concerned. Plastic doesn't gleam like crystal does.

A few of the richer, better established places are pure crystal, though. Take the Glittering Dream nightclub, for instance. It's not only made completely - inside and out - of the clearest crystal you can find, it was grown on the spot. They used some of the most advanced shaped crystal growth techniques in the universe to shape that place just how they wanted - that's why it looks like a triple helix. The owner wanted to make a statement about the building blocks of life being built out of the building blocks of planets or something or other. Why a triple helix, you ask? To be different, mostly, I think.

That does sum up the whole Federation in a nutshell, doesn't it? Being different. Walk down the street of any town on any modern Federation planet and you'll see a thousand different fashions all walking past each other. Some calm, some loud, some downright perverse (ever hear of a place called the Caduceus, on Sovicou? Eugh, don't ask, you don't really want to know). Each and every one of us tries to seize individuality as hard as we can. It's what's made the Federation the wonderful mess of a melting pot it is today.

Damned odd thing about it is, though, it's also what makes us the strongest society in the universe. What do I mean? Well...

Take another look at the Boulevard. Ignore the buildings, look down at the road. Pretty, eh? Cobblestoned, but it's all still clear and gleams like nothing else, not even the best buildings? And it seems bottomless, right? There's a reason for that. The "cobblestones" are just decoration, carved into the surface. The street itself seems bottomless, but it really goes down for twenty meters. You see, the Boulevard itself - the road, and the foundations of all the buildings for about a block all around - is one solid chunk of diamond. Manufactured diamond, but still as hard as the real thing. Five square hundred-meter blocks laid in a row, each twenty meters deep, and the hardest material in the known universe. And for eighty meters beneath that, it's layers of plates of latticed crystal-carbonate-nanofiber armor - the same stuff used in the most elite of military starships. The Boulevard is really the shield for the security bunkers of the three governmental branches and the Military Command in case of planetary bombardment - you can shoot a shell from a thousand-millimeter kinetic accelerator from orbit onto the Boulevard and not achieve a breach through the individual blocks. And even when the diamond shield does break, then you have to go through the layered carbonate-nanofiber armor, and you still have chunks of diamond to get through, which makes any shot bounce and lose force. Nuclear weapons'll do nothing to the topshield - it's already been heated and compressed, after all - and it's heavily faceted in layers so shooting it with lasers from orbit is totally pointless. Never mind the heatsinks, in any case - they bleed off excess heat into the surrounding earth, so you'd have to direct enough firepower onto the Boulevard to turn half the district into molten slag to get through. Only direct-contact antimatter bombs could do the job, and even then it'd need enough antimatter blasts to end up destroying most of the Caille city district in the process. Essentially, you can't get to the bunkers without laying waste to the entire city, and generally invaders who want territory want to try and keep urban centers as intact as possible.

The Ultra-Nationalists came up with the idea, of course (who else would?), during the early days of the Caldari War. They were afraid the Caldari might try and pull something exactly like Tovil-Toba ended up doing, and so decided to spend a ridiculous sum of money on the safest command bunker money could buy. One of them was sharp enough to realize that the project could pay for itself with a bit of deft positioning, though, and suggested putting civilian structures on top of the diamond shield. Even after the UNats were deservedly kicked from office, Tovil-Toba managed to convince just about anyone in office that the UNats might have been on to something concerning a super-fortified bunker for the government in case of concentrated planetary assault. So the thing was built, and the government rented space on top of it to whoever wanted it. They made back the expense in 20 years and have been raking in profit ever since.

Heh. I can see you're getting tired of the allegories, so I'll get down to it: the Federation, for all of its wild diversity, is a lot stronger than it looks. Any citizen with half a brain can understand that the freedoms that let us wear translucent clothing aren't exactly looked on favorably elsewhere. (I'll admit not everyone has that much of a brain, and again, you want examples, head for Sovicou... or better yet, don't.) They understand that, despite how different we all are, what we have collectively is worth defending. Get a Gallentean angry about his freedom or the freedom of someone he knows and he'll be ready to fight to the death and further. Sure, some folks might be "armchair activists" about Amarrian slavery... that's not what I'm talking about. The Minmatar aren't "our people", or at least the Republic ones aren't. It's one thing to protest something happening many light-years away. But the Amarrians never made more than probing slave raids into the Federation, and you know why? They immediately realized that they'd never be able to enslave us, not without slaughtering most of us. Even if they did get people off of the streets of Luminaire, or Intaki, or Daasa, or Sovicou, or wherever, we'd fight them to the absolute end. Beneath all of our differences there's a single bond between every living Gallentean that makes us hard as diamond: a love of freedom.

And yeah, that's your answer, after a fashion. I figured you were here for my reaction to Kataphraktur's comments about Gallente-Amarr relations. Soon as I heard them I knew a reporter would be here, although I wasn't sure if they'd send you. I brought you up here so you'd understand the reason behind the answer I'm going to give.

And the answer is: I agree. Sooner or later, the Federation and the Empire have to beat the ever-loving shit out of each other and only one will rise from the carnage. One of us surrenders individual freedom for a universal human mission, and the other allows each person to define his own mission. In the end, the two can't co-exist; they're polar opposites, and they'll clash eventually. I respectfully disagree with the good Holder as to who'll win, but he's got the right of it; no matter how long we put it off, it's got to end in blood.

And I just hope to the Gods that we win. If the Amarrians take over the galaxy, we'll never get out of the resulting dark age.

Anyway... enough worrying about the Amarrians, eh? Come on, let's head for the top bar of the Glittering Dream. If you think this view is something, you haven't seen anything yet.

Oh? What's that? Wondering why anyone would ever want to walk onto the Crystal Boulevard, knowing what it really is?...

Well. It's like I said earlier. If you were an invading army, and you wanted to take the planet, would you want to destroy a national treasure, frequented by the citizenry, and be forced to destroy the entire city along with it, just to get at the leadership?...

Now come on. They've got this drink you've just got to try. Quafe, I think it's called..."

- comments made by Duran Ricard, 6th Federal Ambassador to the Amarrian Empire, to a now-forgotten reporter of Intaki descent, 60 years ago.